Had this little number in Jamie’s Italian. I like finding eateries with less “lager” lagers. This is one. It has the refreshment of a lager without the harsh, mass produced, sharpness of a modern day restaurant beer.

Despite the photo, was quite carbonated, and very cold. I prefer less “cold” beers (which is why I like ale so much) – but it was nice enough. Slightly malty with the possibility of citrus in. 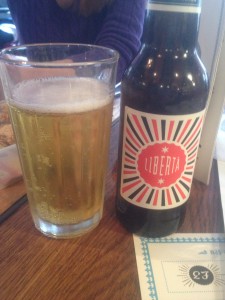